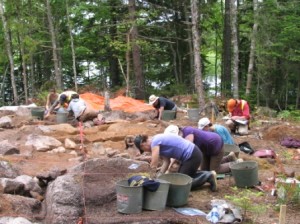 Reconnaissance identified four areas of high archaeological potential. Subsequent shovel testing confirmed that two of those areas contained Precontact sites. While the design of Brigadoon Village was easily altered to avoid ground impacts in the area of one of the sites, all options to avoid the other site – Brigadoon 1 Site (BfDd-48) – would have involved either prohibitive costs or extensive delays that would have threatened the success of the overall Brigadoon Village project.

Following discussion with provincial regulators (the Heritage Division) and appropriate First Nations representatives (the Kwilmu’kw Maw-klusuaqn Negotiation Office on behalf of the Assembly of Nova Scotia Mi’kmaw Chiefs), the decision was made to conduct mitigative archaeological excavation of the critical portion of Brigadoon 1 Site. CRM Group conducted the mitigation rapidly by applying three supervisors and a team of nine experienced archaeological technicians. 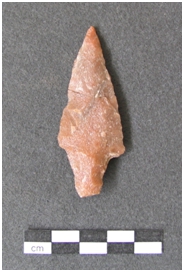 The excavation resulted in the documentation of approximately 40 archaeological features and yielded more than 2,300 artifacts. It is now speculated that Brigadoon 1 Site represents a 2,000 year old site used primarily for brief stopovers and seasonal fish processing.

As a result of the mitigation, approval for construction within the excavation area was quickly achieved. It is anticipated that Brigadoon Village will incorporate the results of the excavation into camp programming and promotion.