In March, 2010, Cultural Resource Management (CRM) Group was retained by Nova Scotia Power Incorporated (NSPI) to undertake archaeological screening for the Digby Transmission Line, a new transmission line that will connect elements of the proposed wind farm with an existing substation at Digby, Nova Scotia. The 18 kilometres corridor extends from the summit of Seawall Hill, on Digby Neck, across the isthmus between St.MarysBay and the AnnapolisBasin. Over the length of its alignment, the corridor traverses cleared hill-tops (up to 130 metres above sea level), wooded slopes and dyked marshland (virtually at sea level).

Following completion of background research, CRM Group archaeologists walked the full length of the corridor to evaluate archaeological potential. Based on the combined results of research and reconnaissance, the team identified four archaeological sites and three additional areas of high archaeological potential. The archaeological sites, registered by the provincial Heritage Division, represent early farmsteads. Three of the farmsteads (Seely Brook Sites 1 to 3) are believed to have been established by Acadians sometime before the 1783 founding of Digby. The other farmstead (Gullivers Cove Site 1) is believed to have been established by United Empire Loyalists shortly after 1783.

Recommendations have been developed for the avoidance of these sites. 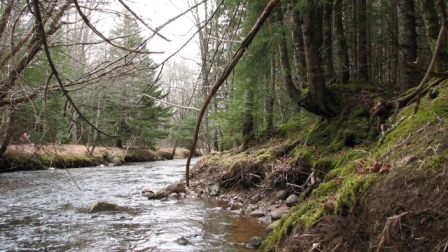