Between 2007 and 2011, Cultural Resource Management (CRM) Group Limited was retained by Nova Scotia Power Incorporated (NSPI) to search for, identify, assess and delineate archaeological resources in possible construction areas for the replacement of an existing hydroelectric dam at the natural outlet of GaspereauLake in KingsCounty. Combining reconnaissance, shovel testing and test unit excavation, this study resulted in the delineation of 21 archaeological sites. Although these sites included the remains of a 19th century lath and shingle mill, they primarily represented First Nations habitation from about 5000 years ago to the historic period. 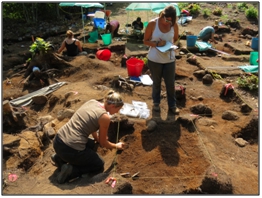 Due to the nature of the sites identified as a result of the study, NSPI entered into discussions with the Assembly of Nova Scotia Mi’kmaq Chiefs through the auspices of the Kwilmu’kw Maw-klusuaqn (Mi’kmaq Rights Initiative) Negotiation Office (KMKNO). CRM Group worked with NSPI and KMKNO to facilitate these discussions. Included in the discussions were representatives of the Nova Scotia Office of Aboriginal Affairs and the Special Places Program of the Nova Scotia Department of Communities, Culture and Heritage. 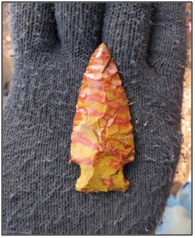 Using the archaeological site data provided by CRM Group, NSPI engineers developed a design for a new dam and spillway that would avoid the archaeological sites as much as possible. Despite all attempts for complete avoidance, the proposed design resulted in a construction footprint that included portions of five Precontact sites.

In 2012, CRM Group was retained by NSPI to initiate archaeological excavation in order to mitigate the portions of the five Precontact sites within the identified construction zones. Involving a team of 25 archaeologists, the manual excavation of 745 square metres, and the recovery of an estimated 200,000 artifacts, this mitigation was one of the largest archaeological projects ever conducted in Nova Scotia.