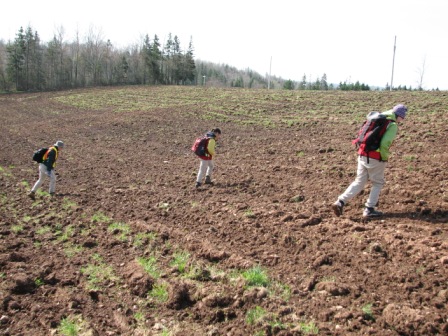 In the spring of 2008, CRM Group was retained by Acadian Mining Corporation to undertake archaeological screening and reconnaissance of the Getty Development Property, a proposed open pit mine site to access lead and zinc deposits associated with those currently being mined at the nearby Scotia Mine, located near the small rural community of Gays River, Nova Scotia.

It is anticipated that on-site surface features would include the open pit mine, a crusher, a settling pond, stockpiles of overburden and product, as well as a service road to transport ore from the Getty Development mine site to the existing milling operations at Scotia Mine.

CRM Group undertook a background study designed to explore the land use history of the study area and environs, and provide information necessary to evaluate the property’s archaeological potential. An examination of historic mapping and aerial photographs revealed that the original alignment of the Cobequid Road ran directly through the study area. Visual examination confirmed that portions of the original alignment were still visible in existing hedgerows. Several areas exhibiting high potential for encountering Precontact and/or early historic archaeological resources were also identified, as well as five potential historic sites.

As the next stage of archaeological investigation, the assessment would build upon the results generated by the initial screening. The assessment would focus on the evaluation of identified cultural features, as well as areas of high archaeological potential identified within the Getty Development study area. Shovel testing and visual assessment of cultivated fields would be used to assess the significance (age, function and integrity) of cultural features identified during the screening phase of the project.