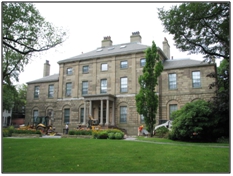 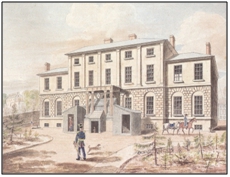 August 2011, the Nova Scotia Department of Transportation and Infrastructure Renewal (NSTIR) initiated repairs to the east entrance stairs at Government House in Halifax â€“ the oldest government residence in Canada and the oldest consecutively occupied government residence in North America. This work involved mechanical excavation for the removal of two curved stone staircases and the masonry base of an interlying portico, as well as extraction of all underlying soil down to bedrock. Recognizing the historical and archaeological value of Government House and its Grounds, NSTIR retained Cultural Resource Management (CRM) Group Limited, through Conestoga-Rovers & Associates, to undertake archaeological monitoring in conjunction with the ground impacts.

In preparation for archaeological monitoring, CRM Group reviewed the history of the Government House Property to provide a context for the identification and interpretation of archaeological features. This research identified not only the suite of structural changes that came with the establishment and development of the existing 1807 residence, but also the suite of structural changes that occurred between 1750 and 1800, when the property was the site of Halifax’s first hospital and an officers’ quarters.

During the actual stairway repair work, the archaeological monitor inspected soil exposures throughout all stages of the excavation and remained watchful for any evidence of early historic structural material, artifacts or stratigraphic anomalies. Throughout the process, the monitor worked closely with the repair team to minimize the extent of ground impacts and the duration of project interruptions.

The monitoring resulted in the documentation of subterranean structural elements of the eastern entrance to the house, including the two main staircases, the portico base and its internal chamber, as well as a large sub-floor drain made of cut stone slabs. It was found that the latter was originally the main drain for Government House. Constructed below the surface of the bedrock, presumably to drain the house site during construction as well as during occupation, this drain was recognized as being the oldest element of the vice regal residence. Still containing active plumbing, it was left intact.