In 2003, Dexter Harbour Solutions was awarded a contract by the Halifax Regional Municipality to design and build a sewage collection system (SCS) for Peninsular Halifax, Dartmouth’s harbour shoreline and Herring Cove as part of the overall Halifax Harbour Solutions Project. Cultural Resource Management (CRM) Group was retained by Dexter to provide archaeological support services throughout the development project.

As a result of archaeological monitoring, CRM Group archaeologists identified and recorded a number of early utilities and street surfaces, as well as the remains of a variety of buildings which predated the current street grid.Â  When features were identified, they were photographed and documented. Where artifacts were present, they were collected and retained for subsequent analysis. 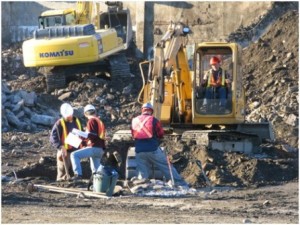 CRM Group worked closely with Dexter’s engineers and construction crews to avoid delays and meet tight development schedules. On those occasions when construction was delayed as a result of archaeological discoveries, CRM Group archaeologists worked diligently to minimize delays while responsibly documenting and mitigating impact to the resources that had been uncovered.