Archaeological Screening, Assessment & Testing for the Twinning of Highway 101 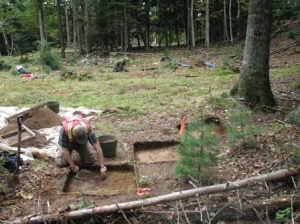 In 2008, the Nova Scotia Department of Transportation and Infrastructure Renewal (NSTIR) retained Cultural Resource Management (CRM) Group through Dillon Consulting Limited to undertake archaeological screening and assessment for the twinning of Highway 101 between the communities of Coldbrook and Hortonville, Kings County, Nova Scotia. The study was to address the highway construction corridor (27.5 kilometres long), the footprint of a new interchange and the alignments of six new access roads (totalling more than 11 kilometres).

For the screening, CRM Group combined archival research and field reconnaissance to evaluate archaeological potential. Many areas of high archaeological potential were identified. Each of the areas was subsequently assessed, either by shovel testing or, in the case of active agricultural lands, by visual assessment of freshly ploughed and weathered fields.