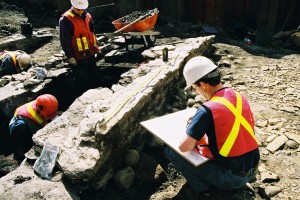 Archaeological potential modelling of the Halifax waterfront undertaken for Dexter Harbour Solutions indicated that the location of the proposed Maritime Museum CSO exhibited a high degree of archaeological sensitivity. The sensitivity was based on the site’s location on the original shoreline of Halifax Harbour, within the historic core of the mid-eighteenth century settlement. Examination of eighteenth and nineteenth century maps of the shoreline demonstrated continued occupation and expansion of the site area beginning in the mid-eighteenth century.

Since the footprint of the CSO overlay a portion of Lower Water Street and the adjacent sidewalk, it was impossible to assess the site prior to the start of construction. Consequently, the assessment was incorporated into the excavation associated with the installation of sheet piling around the perimeter of the construction site.

The high visibility of the excavation generated a great deal of public interest and media attention in the archaeology of Halifax, as well as the Halifax Harbour Solutions Project.