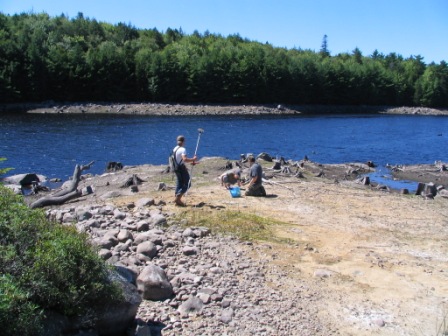 During the summer and early fall of 2004, Nova Scotia Power Incorporated (NSPI) carried out repair work on six powerhouses and three fish ladders within the Mersey Hydro System between Lake Rossignol and the village of Milton. To facilitate repairs, the associated headponds had to be lowered to pre-dam water levels. Through discussions with the Heritage Division – Nova ScotiaMuseum, it was recognized that dewatering of the headponds could expose undocumented Mi’kmaq and early Euro-Canadian archaeological resources along the MerseyRiver system. Although there was some concern that construction related activities could impact archaeological resources, the greater concern was the potential for resource loss through looting.

In order to identify undocumented archaeological sites and minimize potential impacts resulting from their exposure, NSPI retained Cultural Resource Management (CRM) Group Limited of Halifax to undertake archaeological reconnaissance and site documentation within each of the dewatered headponds. Working in close consultation with NSPI, as well as the Heritage Division – Nova ScotiaMuseum, the Confederacy of Mainland Mi’kmaq and Acadia First Nation, CRM Group archaeologists conducted an intensive program of archaeological field survey followed by a thorough mapping of all identified features and artifact scatters. As subsurface testing was not part of the proposed field program, all survey activity was restricted to the examination of the exposed ground surfaces.