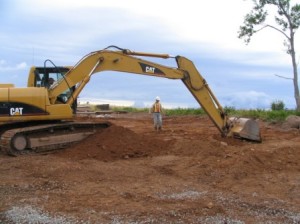 During construction of a sewage treatment plant on the Strait of Canso in August 2005, concerns were raised by the local historical society that construction of the facility would impact a long abandoned cemetery. Cultural Resource Management (CRM) Group Limited was retained by ABL Environmental Consultants Limited on behalf of the Town of Port Hawkesbury and the County of Inverness to conduct emergency archaeological investigations into the existence and extent of the reported cemetery.

Despite the presence of a recognized pioneer cemetery immediately to the south and an isolated family plot to the west of the construction site, initial examination of the stripped footprint of the facility failed to identify any physical evidence of burials – the evidence needed to activate the provincial Cemeteries Protection Act. However, historic mapping discovered by the local historical society depicted the presence of three distinct cemeteries in the area of the facility.
Based on the proximity of the known cemeteries and the historic map evidence, CRM Group archaeologists recommended that all further excavation in the upper area of the site be monitored to identify physical evidence of the third cemetery and prevent further impact to the associated burials. Careful mechanical stripping of the suspected cemetery area revealed the fragile remains of eight coffins. Although the identity of the individuals was not known, it was assumed that they were related to the Embree family, memorialized in the adjacent family plot. 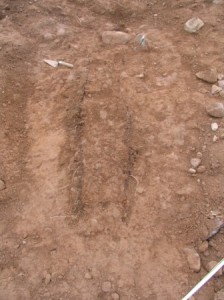 Consultation between the next-of-kin, members of the local historical society, provincial regulators and municipal leaders resulted in a decision to terminate all construction on the sewage treatment plant site, relocate the project to a more suitable location and restore the initial site.