Archaeological Assessment and Testing of Aboriginal Sites on Sandy Lake 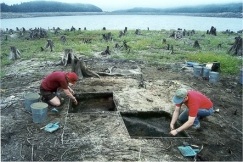 Site reconnaissance identified in excess of 600 artifacts scattered over an area of approximately 2,000 square metres. Individual plotting of the surface artifacts prior to their collection, clearly delineated the boundaries of the two sites. Subsequent testing focused on a comparison of eroded and stable areas within each site. Excavation of seven 1 metre square test units yielded a further 3,500 artifacts consisting of pottery, stone tools, discarded lithic flakes and food bone. Based on the analysis of diagnostic pottery and stone tools, the sites appear to have been occupied between 1000 and 1500 years ago.

Due to particularly sensitive cultural issues associated with the site, CRM Group worked closely with the Confederacy of Mainland Mi’kmaq and the Nova Scotia Museum to ensure issues were dealt with in an open and respectful manner.