Archaeological Mitigation of the Sinkhole Site

In 2007, Cultural Resource Management (CRM) Group Limited was retained by Conestoga-Rovers & Associates, on behalf of ScoZinc Limited, to undertake excavation of the Sinkhole Site (BgCu-6). Excavation of the site to the satisfaction of the Special Places and in consultation with the appropriate representatives of the aboriginal community was among the environmental assessment conditions set by the Nova Scotia Department of the Environment and Labour for the approval of a mine expansion that would involve a diversion of Gays River in the area of the site. 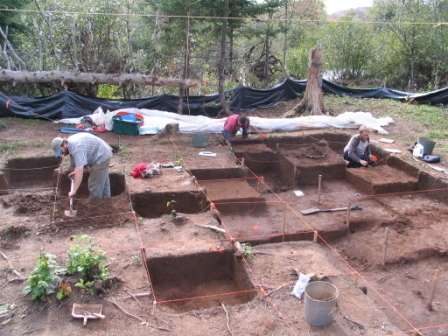 CRM Groups mitigative archaeological excavation of the Sinkhole Site determined that it was a relatively small habitation site occupied intermittently over a short period of time during the late Early Ceramic Period (ca. 2350 BP). A total of 1,319 artifacts were recovered, including 4 projectile points, 3 scrapers, an adze and a whetstone. The artifact assemblage, consisting of 99% rhyolite and chert flakes, is indicative of on-site tool production through the knapping of exotic stone. The excavation documented several pit features situated at irregular intervals around the periphery of the dwelling areas. Due to their shape and depth, it is likely that these pits functioned primarily as smoking pits, rather than as hearths.

With the identification of smoking pits, it is possible that the Sinkhole Site served as an effective fishing station. Very few Early Ceramic Period sites have been fully excavated in Nova Scotia. The information recovered by CRM Group will be of invaluable use to future studies within the province.