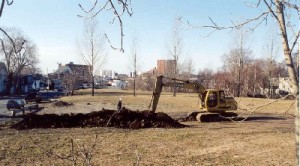 In the spring of 2002, the Halifax Regional Municipality accepted a proposal from Provident Development Inc of Bedford to redevelop the Starr Manufacturing property in downtown Dartmouth. Concerned that physical evidence of the early nineteenth century Shubenacadie Canal, as well as other early industrial and commercial facilities would be impacted, Provident retained CRM Group to conduct an archaeological assessment of the property to identify significant heritage features and design an overall cultural resource strategy for the responsible management of on-site resources.

Until their destruction by fire in 1998, the Starr Manufacturing buildings were considered to represent a post-1850s period of industrial ascendancy in Nova Scotia. The industrial complex developed on the banks of the Shubenacadie Canal and actually utilized the marine railway component of the second canal system to transport raw materials and finished products. Architectural recording of the Starr structures prior to the fire revealed intact structural elements of the early Shubenacadie Canal (1826-1831) had actually been incorporated into the substructure of the early powerhouse.

Archival investigations provided further evidence of the development of the two canal systems, as well as the origins and expansion of the Starr manufacturing complex. In addition, documentary evidence was uncovered which pointed to other early nineteenth century industrial facilities, including a distillery and foundry, located adjacent to the development property.

Archaeological investigations on the site revealed a variety of features relating to the two canal systems, as well as the later development of Starr Manufacturing. Despite the intensive industrial reuse of the site, the canal features were found at shallow depth and relatively intact. During subsequent stages of the project, archaeological mitigation strategies will be developed and implemented to facilitate site redevelopment while minimizing the loss of heritage resources.