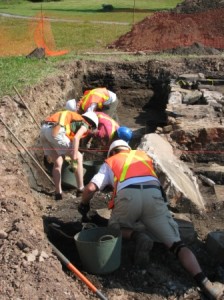 In 2007, Halifax Regional Municipality (HRM) and the Shubenacadie Canal Commission (SCC) began plans to develop the Canal Greenway Park. Within this development, HRM and the SCC proposed to design and erect a representation of the power house associated with the inclined plane of the Dartmouth Marine Railway. To generate a clearer understanding of the physical relationship between features and to minimize potential impacts to the features, HRM and the SCC commissioned CRM Group to archaeologically investigate the turbine chamber, the surrounding lock, the related tailrace and the associated elements of the Starr Manufacturing complex.

The Starr Manufacturing property lies along the historic alignment of the stream that flows from Lake Banook to Halifax Harbour. Historic accounts and oral tradition indicate that, prior to the founding of Halifax and Dartmouth in 1749, this stream was an important part of a natural waterway used by the Mi’kmaq and their ancestors to travel between the Atlantic coast and the Minas Basin. Beginning in 1749, the flow of the stream was used to power a succession of mills built south of the property (near Halifax Harbour) and north of the property (near Lake Banook). These mills produced lumber, flour and other products vital to the development of the harbour settlements. With the commencement of the Shubenacadie Canal construction in 1826, the property became the site of Locks 3 and 4 of a six-lock canal system designed to enable barges to transport goods from Halifax Harbour to Lake Banook en route to other canal elements and the Minas Basin. Financial difficulties resulted in a period of abandonment for the canal. In 1860, Locks 1 thru 5 were replaced by a sloped railway designed to improve efficiency by hauling vessels in cradles from Halifax Harbour to Sullivan’s Pond.

This maritime railway, known as an ‘inclined plane’ also passed through the Starr Manufacturing property, west of the old canal works. Like the old mills, the new railway drew its power from the flow of the local stream. In 1861, Halifax businessman John Starr opened a small nail factory adjacent to the powerhouse. This business, which utilized surplus power generated by the railway turbine, was the origin of Starr Manufacturing Company. The factory expanded rapidly on the property, incorporating the powerhouse and covering over the canal. Ultimately, it produced a variety of metal products ranging from skates to bridges.

Use of the marine railway ceased in 1870 and the Starr Manufacturing Company expanded and modified its building complex. Frequent changes throughout the late 19th and early 20th centuries were necessary to address different markets. The last of the Starr buildings was destroyed by fire in 1998. 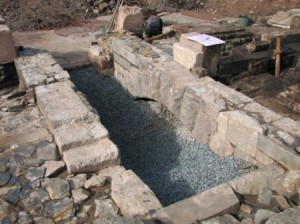 HRM and the SCC have demonstrated a commitment to the protection and interpretation of the archaeological and historic integrity of the site and as such archaeological investigation and monitoring were appropriately incorporated into all development plans.