Archaeological Mitigation of the Woodside Vessel 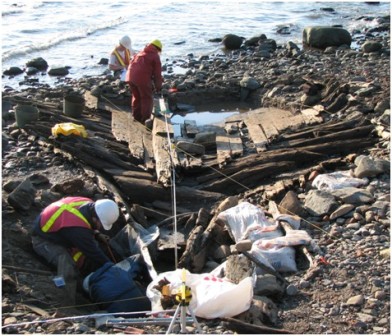 In advance of Halifax Harbour Solutions’ sewer construction along the Dartmouth shoreline, archaeologists with Cultural Resource Management (CRM) Group conducted background research to identify areas of archaeological sensitivity which would have to be tested in advance of construction or monitored during excavation of the sewer trench.

Of particular interest were the remains of a wooden vessel identified some years earlier by local divers in the intertidal zone. While initially thought to have been of late nineteenth or early twentieth century origin, closer scrutiny of nineteenth century maps of the Dartmouth shoreline suggested a much earlier date.

In November 1813, a hurricane blew through Halifax Harbour sending some 45 vessels crashing onto the Dartmouth shore. Historic accounts of the day identify several in the general area of the Woodside vessel, but one specifically on the point in question. Although not named in the contemporary newspaper accounts, the vessel was identified as a ‘recaptured brig’, a two-masted, square-rigged sailing vessel. The reference to ‘recaptured’ suggests that the vessel had been captured by the Americans during the early years of the War of 1812 and then recaptured by the British before it was blown ashore in the storm. Following the storm, the adjacent wharf structure was expanded southward to incorporate the vessel.

For approximately a month in the late fall of 2005, CRM Group archaeologists and several dedicated volunteers struggled with fluctuating tide levels, tropical storms and diminishing daylight to excavate and document that portion of the wreck which would be impacted by construction. The excavated bow portion of the wreck was later covered with fill materials to protect the site from direct impact of construction trenching. The project benefited from ongoing consultation with the Maritime Museum of the Atlantic and the Special Places Program of the Nova Scotia Department of Communities, Culture and Heritage.